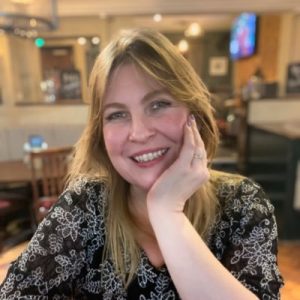 Born in Sweden; I left school at sixteen. I had a difficult time through school because I was obese and struggled with heavy periods from the age of nine. I found it challenging to concentrate, and it wasn’t easy when my teacher told me that there was no point to continue teaching me, he said it was a waste of time and I believed him. For the rest of the years, I felt trapped and misunderstood. I was only 16-years-old when I left, but I knew it was the right thing for me. The school was challenging, and when I left I started to work in a retail shop.

I did try different jobs, but I was restless and moved to Copenhagen in Denmark. I loved living in Copenhagen, and I even enjoyed my full-time job as a shop manager at a big retail company. In my spare time, I did tarot readings, photography, and at one point, I wanted to start a music booking agency. I contacted places in Europe, and I flew out to Iceland and pitched my idea to a venue. The deal fell through, but I learned so much, and I also realised that the music industry was not for me.

In 2007 my health declined. I had felt unwell for a few months, and one morning in November, I woke up in so much pain and called the ambulance. With a ruptured 9 cm cyst on my left ovary, I stayed in the hospital for four days.

I didn’t understand what was happening to me and ignored the symptoms, and in February 2008, I collapsed at work and was admitted into the hospital again. This time they had to remove my left ovary as well as an 8 cm cyst. Diagnosed with Endometriosis and never be able to have any children, I did not understand what Endometriosis was.

Still, I began to do research, and I could finally connect the missing dots and why I had been feeling the way I had. There is no cure for Endometriosis, and despite the myths and stigma, it spreads in your body and damages your organs. It can be found in different parts of a woman’s body – The ovaries, cervix, bladder, uterus, lungs, kidneys, inside the bowel, rectum, heart, brain and even your eyes. Little did I know, but this was not the end of my endometriosis story.

On the 24th of April 2009, I had a lifesaving colostomy operation, and the same day the unthinkable happened; my mother was found dead. From that moment, everything changed, and the person I used to be was no longer present. At the hospital, they told me that my tumour might be cancerous, and I had to wait for the biopsy. It was an anxious wait; however, after four days, I found out that my tumour was benign; it was Endometriosis that had caused my twisted bowel. It was not cancer, but it was difficult to celebrate, because how could I be filled with joy when my mother was no longer here?

Forced to be still, I was sad, devastated and angry, but I did a lot of soul-searching because there was nothing else I could do. I had to focus on my recovery and learn my new routines with my colostomy.

Slowly I began to listen within and trust in Spirit. It was a blessing to hear the guidance from my soul and my guides. They had tried to whisper and get my attention earlier, but me being too occupied I never listened. I had an “awakening”, and I said to myself that I have to accept my situation, because there was nothing I could do about it. I couldn’t go back in time and change it. Being angry and sad would only do me more harm, and it would not bring my mother back or get rid of my colostomy bag.

All things considered, I realised how lucky I was. I was alive, and after six months with my colostomy bag, my colon had healed, and I had a colostomy reversal. After the second operation and during my recovery, I found an enormous strength to carry on, and I wanted to be well again. I wanted to live my life to the fullest, write and move to the UK, support and guide others.

Nowadays I am based in Hertfordshire with my man, I have a regular job with the NHS, and apart from spirituality and writing quotes, I love business, marketing, entrepreneurship and strong coffee.

I have also come to terms with that I live with an incurable illness, and today my endometriosis is so severe that I would need three major operations. However, the endometriosis specialist, as well as the bowel surgeon has strongly advised me to not go through with it. It would be too risky for my life. Instead, I am on treatment to suppress the endometriosis and the pain. The treatment has forced my body into “chemical menopause.” This is not easy, but I rather live with the side effects of the treatment than going through lifechanging risky operations.