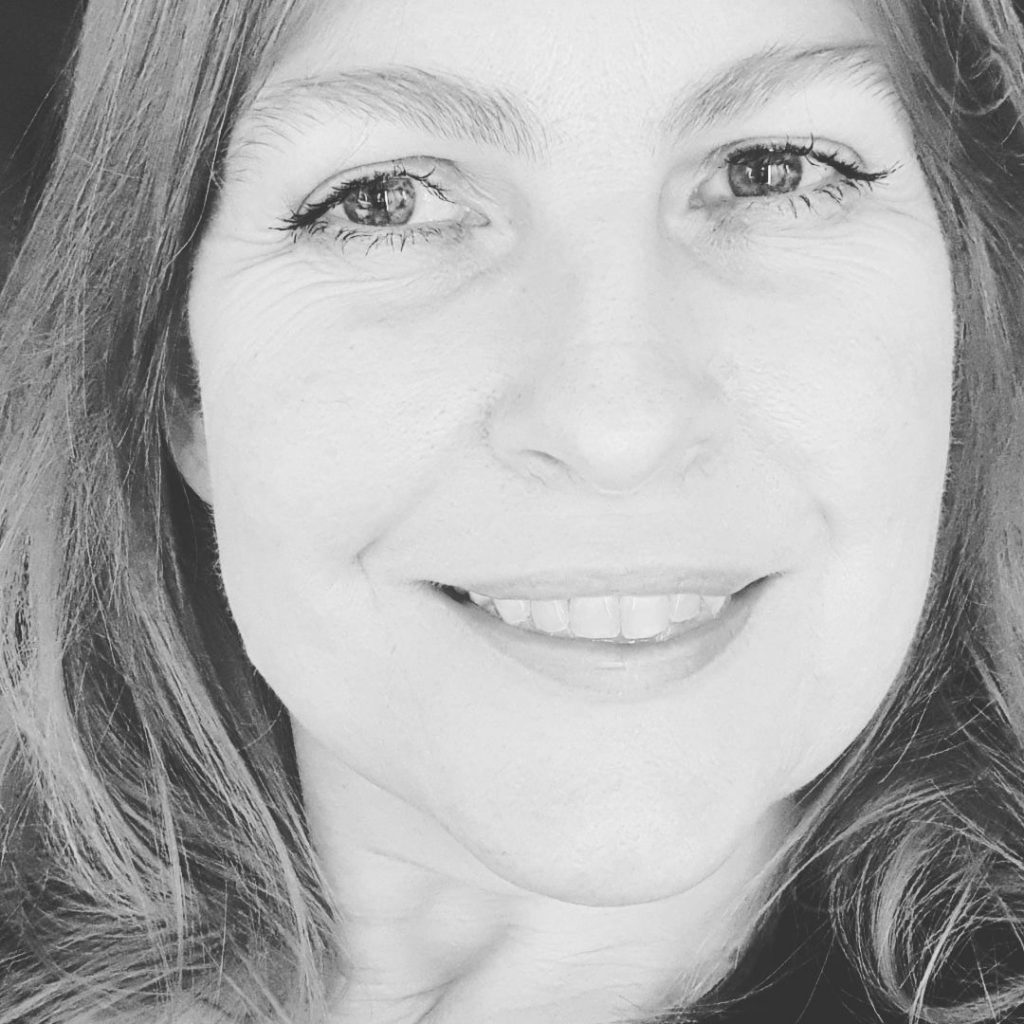 1-2-1 Spiritual Coaching, Mentoring and Guidance with Cath B 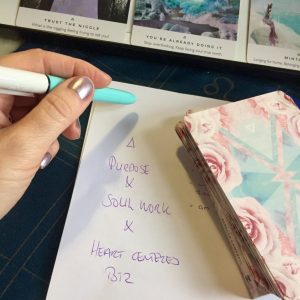 Read My Quotes In Discover Your Purpose – The Anthology 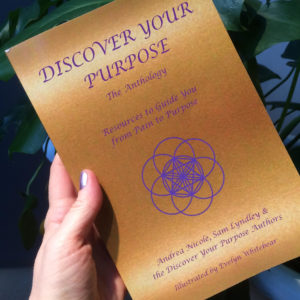 Lying in my hospital bed, I saw mum peering at me from behind the door. I’ll never forget the expression on her face. She’d never looked so sad.

I was recovering from an eight-hour op, felt totally confused. I was living in Denmark at the time and mum was in Sweden. There was no way she could have been in the hospital with me. ‘Mum’, I called, but she disappeared. Still woozy from the anaesthetic, I wondered if I was seeing things.

I’d had the operation because of a condition called endometriosis, which had caused a huge growth inside me. The growth had severely damaged my colon and I’d suffered stomach pains, had difficulty eating and trouble going to the loo for months. Even though the op, to remove 20 cm of my colon, had been a success, I was in a bad way. I was worried sick that the growth might turn out to be cancerous, and even if it wasn’t, I was attached to a colostomy bag, which the doctors said I might have forever.

I was 35, single and wanted to settle down someday. I couldn’t help wondering whether having a colostomy bag would ruin my chances of finding love for good.

I felt so low and seeing mum there only made it worse. I’d been trying to contact her for a couple of days, but there was never any answer when I called her house. She hadn’t been well for a while. I couldn’t shrug off the feeling that something awful had happened to her.

The day after my operation I was able to reach my phone, and I saw that my brother had called me multiple times. I kept my phone on my chest, and my brother called. He could hardly speak and all he said was that mum was gone. Mum had suffered kidney failure at the age of 69. I knew that it was mum Spirit that I saw the day before, and now I knew why she looked so sad. Losing my lovely mum would have been dreadful at any time, but I needed her now more than ever.

Fortunately, four days later, tests revealed that the growth wasn’t cancerous, but I didn’t feel like celebrating. I was missing mum and stuck with a colostomy bag. I couldn’t see a time when I’d ever have a normal life again. I couldn’t leave my flat, I had carers looking after me and teaching me how to get used to the stoma and my new routines. My spirit sank lower and lower, and two months after the surgery, I hit rock bottom. I lay in my bed sobbing my heart out. I felt like I had sunk into a black hole from which I’d never emerge. I’m ashamed to say it now, but I felt like I just couldn’t go on with life. I screamed, I cried. I ached to have my mum there. I just wanted her to give me a hug and tell me I was going to get through this. Then suddenly I felt a presence around me. I knew it was my mum. And it literally felt like something lifted me up from the black hole. And I’d realised just how upset she’d be to see me in such a terrible state, wanting to give up on the life I was still so lucky to have. At that moment, rather than thinking about giving up, I decided that I was going to bounce back and make mum proud.

My mum was an amazing woman and a real fighter. She’d suffered from terrible arthritis since she was 25 and had survived breast cancer. But despite everything, she always had a smile on her face and worried about others more than she did herself. Doctors couldn’t tell me if the colostomy bag would be a permanent fixture or not, but I knew I could deal with it even if that was the case. I could be brave, just like my mum had been. There was no way I was going to let her down. 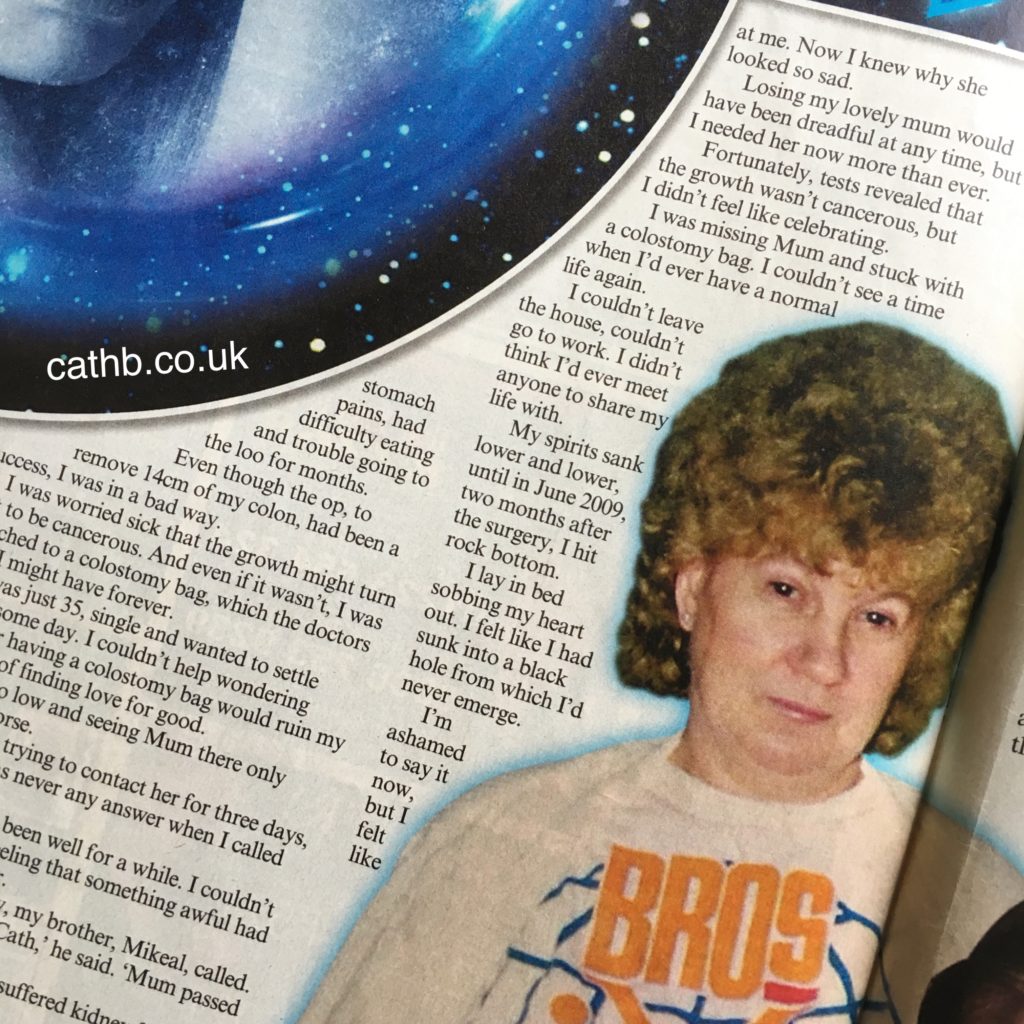 I looked on the internet, found stories from people even younger than me who had learned to live with colostomy bags. They had got on with their lives instead of letting it stop them achieving their dreams and finding happiness. These amazing people were an inspiration to me, and they gave me so much strength.

Six months after my operation, the doctors told me that my colon had healed enough for me to have the colostomy bag removed, but I would still need some corrective surgery to my colon before that could happen. I was thrilled to bits and prepared to have more surgery if that’s what it took to be rid of my stoma and my bag. But I also knew that even if my upcoming surgery would not be a success; I would be fine.

The surgery was a success; my stoma was gone and my colon was attached together again.

Thanks to mum and my strong belief in the Universe, I was strong and prepared. Mum was always with me during my recovery, and having her close in Spirit inspired me to make changes in my life. Before my illness, I worked in retail as a shop manager, but there was a lot of heavy lifting involved, and there was no way I could do that following the surgery I’d on my colon. I still suffered from Endometriosis and my doctor told me that it was time to do something else with my life.

I’d always used tarot cards and listened to my intuition and Spirit, and the guidance I received 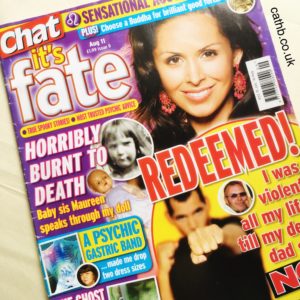 was ‘It’s time to move on’ and I had a strong feeling that I had to move. Denmark was no longer the place for me. I could feel that I was done. My purpose in Denmark was served.

So I took a leap of faith and relocated to the UK the following year in 2010 by myself. It was scary and I didn’t have a clue about what I was doing. But I did it. I also felt that after everything that I’d been through – relocating wasn’t that big of a deal. I could always go back to my home country Sweden.

I know that the operations that I had, the long and painful recovery and even the black hole I found myself in that day, were all part of the journey to where I am today. After all, whatever doesn’t kill you makes you stronger. Surviving illness and experiencing grief has made me even more compassionate and receptive to the suffering and troubles of others. But I couldn’t have done it without mum, I’m so lucky because she looks after me in death just as well as she did when she was alive.

Written by Stephanie Bunce and Catharina B Akesson and Published September 2011.

Tags:a twisted colon, article in it's fate magazine, being a psychic, cath b akesson trowbridge, depths of despair, en svensk i england, endometriosis, fate magazine, flytta till england, flytte fra kobenhavn til London, how to relocate to the uk, how to take a leap of faith, i am a writer and a psychic, i listen to the tarot cards and spirit, I lost my mother, it's fate, jag saknar min mamma, life saving colostomy operation due to endometriosis, min mamma gick bort, my mother in spirit, spiritual coach in Wiltshire, stephanie bunce

A Star From The Source

You are a phenomenal woman

Through loss, illness, rejection and healing I identified my soul purpose - to inspire and motivate those seeking a more purposeful life. 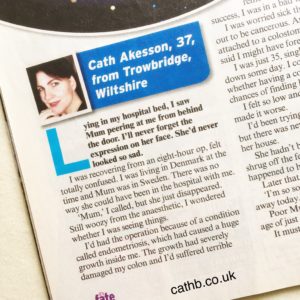